The Route of Parks is a 2,800 km-long panoramic route, an invitation to explore 17 National Parks between Puerto Montt and Cape Horn, that spans the Patagonian Lake District, Aysen and Magallanes, and incorporates the Southern Highway (Carretera Austral), the Patagonian Fjords and the End of the World Route (Ruta del Fin del Mundo).

Its aim is the conservation of Chilean Patagonia, by seeking a harmonious balance between the protection of nature and the economic development of the communities in which these parks are located, through tourism.

The Route is unique in the world, thanks to a combination of utterly unspoilt landscapes, varied ecosystems, native and endemic flora and fauna, all connected to the historical and cultural heritage which has been transmitted by the 60 neighbouring communities.

The Route of Parks was set up by the Tompkins Conservation Foundation, which has been working in Chile and Argentina for 25 years to create National Parks. The idea was to re-establish forest life and develop environmentally-friendly agriculture. It covers more than 90% of the territory which is protected in the category of national parks in Chile, and as such preserves 11.5 billion hectares of unspoilt green spaces (equivalent to three times the area of Switzerland or twice the area of Costa Rica).

The Route stretches across a third of Chile and is of significant ecological value in endemic terms and for the biodiversity of its ecosystems: temperate and sub-Antarctic rainforests, wetlands, imposing mountains, glaciers and the largest network of fjords in the world.

These ancient ecosystems, where nature dominates and humans are a rare presence, absorb four times more carbon per hectare than the Amazon, providing shelter for many species that are facing extinction, including, among others, the Alerce, the Canquen Colorado, the Pudu, and the Huemul.

Records show that it is home to 140 species of birds and 46 species of mammals.

The parks that include the Route of Parks from North to South are:

The Pumalin Park was created in 2018 and its 402,392 hectares of deep forest stretch to the fjords of Reñihue & Comau, forming one of our planet’s most specular coastlines. Hundreds of glacier-formed waterfalls cascade down granite cliffs, with the Michinmahuida and Chaitén volcanoes providing the backdrop and crowing over the landscape. Thousand-year-old Alerces (native trees that are under threat) dominate – 25% of the country’s Alerce trees are located in the Pumalin Park – which presents a major challenge for the preservation of an ancient ecosystem. 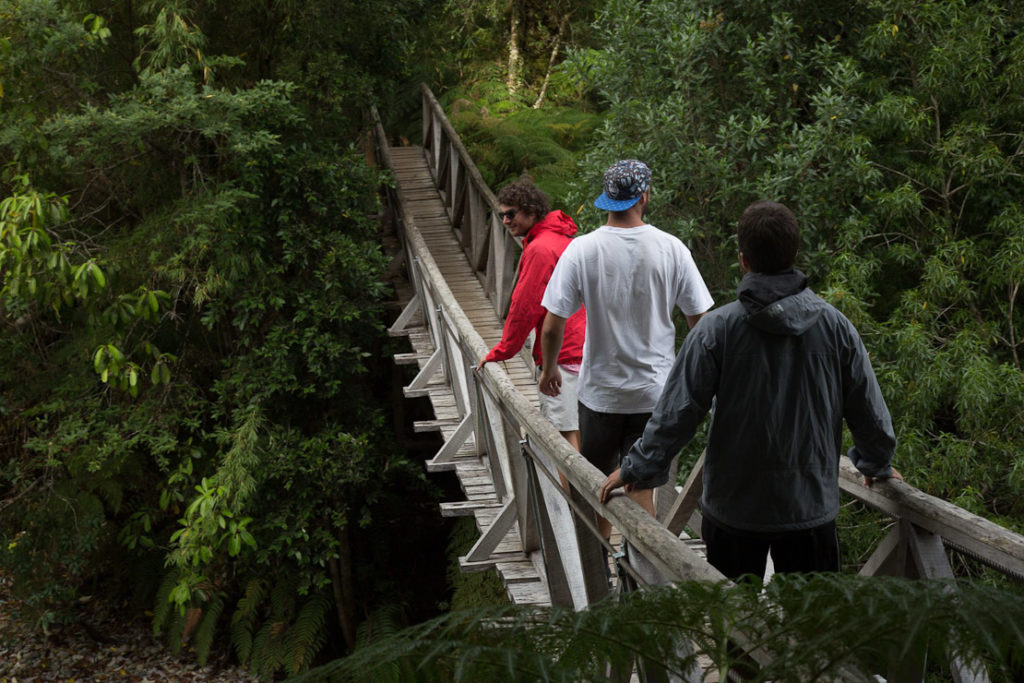 The Queulat National Park, which was created in 1983 and is located 165km to the north of Coyhaique near Puyuhuapi, attracts many visitors thanks to its lush forests, impressive waterfalls, fjords, rocky cliff-faces, powerful rivers and its famous hanging glacier “el Ventisquero Colgante”. The Carretera Austral runs through the park over 40km, offering views of its natural beauty. It protects hundreds of species of trees such as the Coigüe de Magallanes, the Ciprés de las Guaitecas, the Lenga and the Ñirre which serve as a habitat for many birds such as the Carpintero Negro, the Cóndor, the Chucao and mammals such as the Pudú, the Guiña and the Puma. 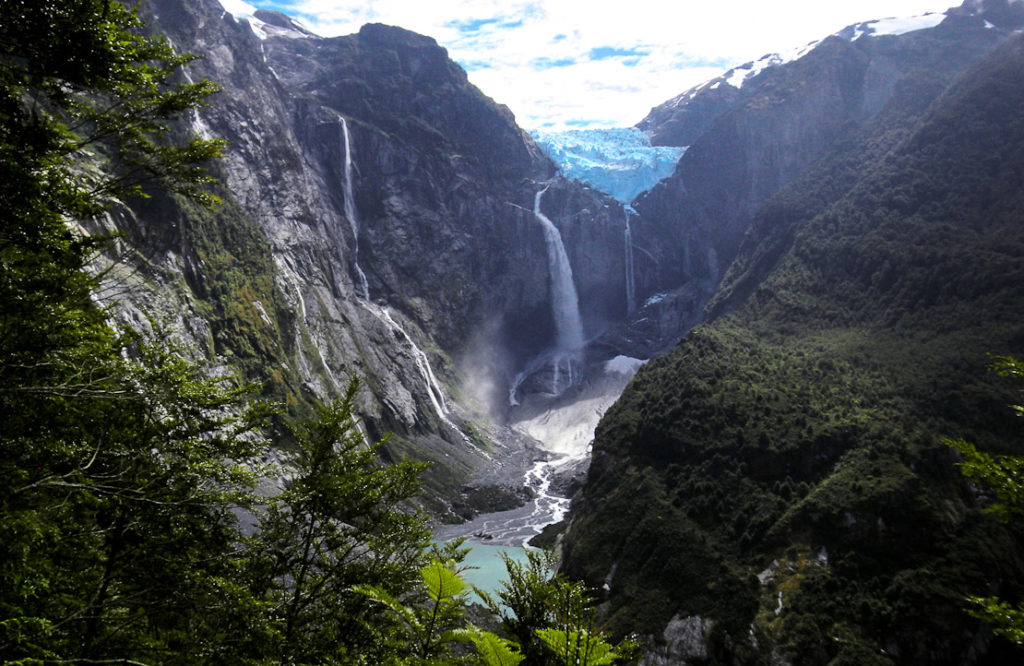 With a peak in the form of a cathedral, waterfalls and hanging glaciers forming intense turquoise-blue lakes, the magnificent Cerro Castillo provides a true spectacle. Rising to 2,318 metres above the communes of Coyhaique and Río Ibañez, it provides one of the best hiking trails in Chile. The Lenga and Ñirre forests provide sanctuary for the Huemuls, which are not uncommon. The Cerro Castillo became a national park in 2018, and is still unfrequently visited. It is at the centre of the Carretera Austral, and visitors that come to explore will probably be lucky enough to be able to marvel alone at the unique landscapes. 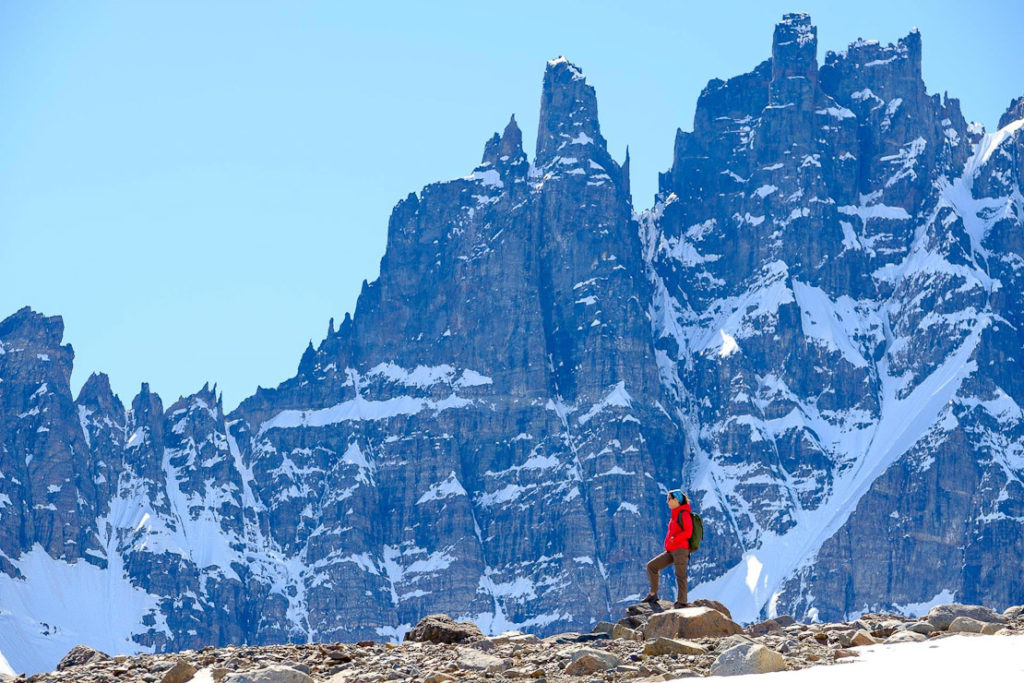 The magnificent landscapes of the Park Laguna San Rafael, which covers over 1.7 million hectares, consists of fjords, islands, estuaries and glaciers. Declared a Biosphere Reserve, it is the main entry point to the Campo de Hielo Norte and to one of its glaciers, the San Rafael. Visitors, which arrive from Puerto Chacabuco or Puerto Tranquilo, come to admire this impressive ice wall and blue-toned seracs, the immensity of its untouched horizons and its biodiversity. In the footsteps of Charles Darwin, Fitz Roy and Alberto de Agostini, the park shows off nature at its most spectacular, in this hidden corner of the Aysén region. 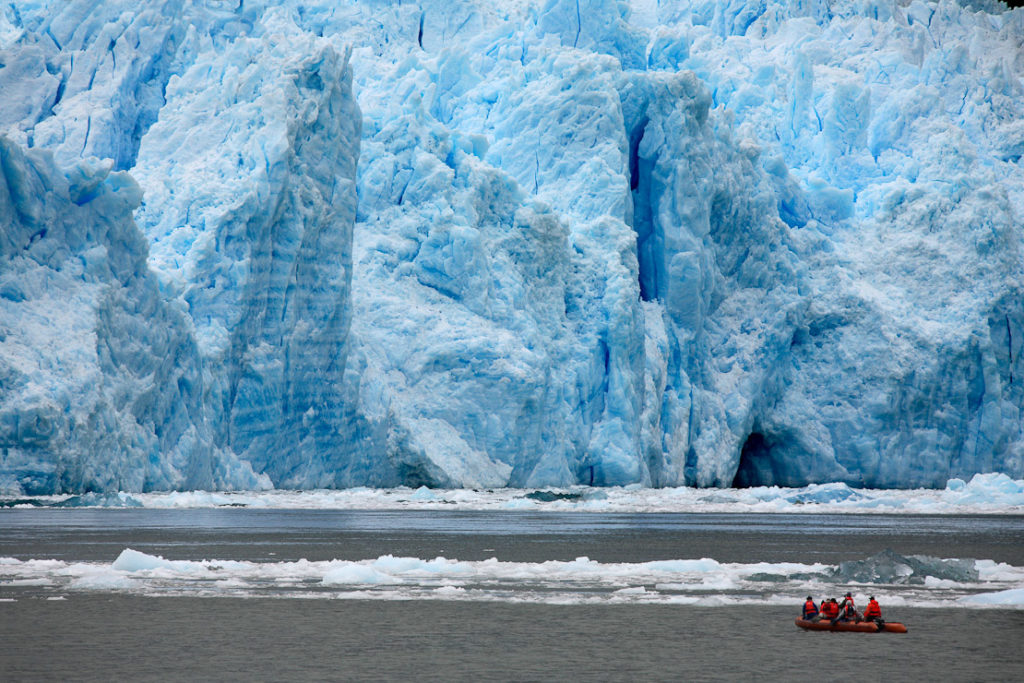 The immense valleys carved out by the Chacabuco river form a natural corridor, long used by the nomadic indigenous Aonikenk (or Tehuelches) people.

Once over-exploited by large ranches for the purpose of cattle rearing, the land was acquired in the early 2000s by the Tompkins Foundation, who donated it to Chile in 2018. Patagonia Park is a true masterpiece of ecosystem restoration, and is now home to the highest levels of biodiversity in the Aysén region. Steppe, mountain ranges, lakes, Lengas and Ñirre forests which coat themselves in red come the autumn, animate exceptionally beautiful landscapes. It is a true paradise for wildlife – it provides a habitat for 10% of the Huemel population in Chile. The park also connects the National Reserves of Jenimeni and Tamango. 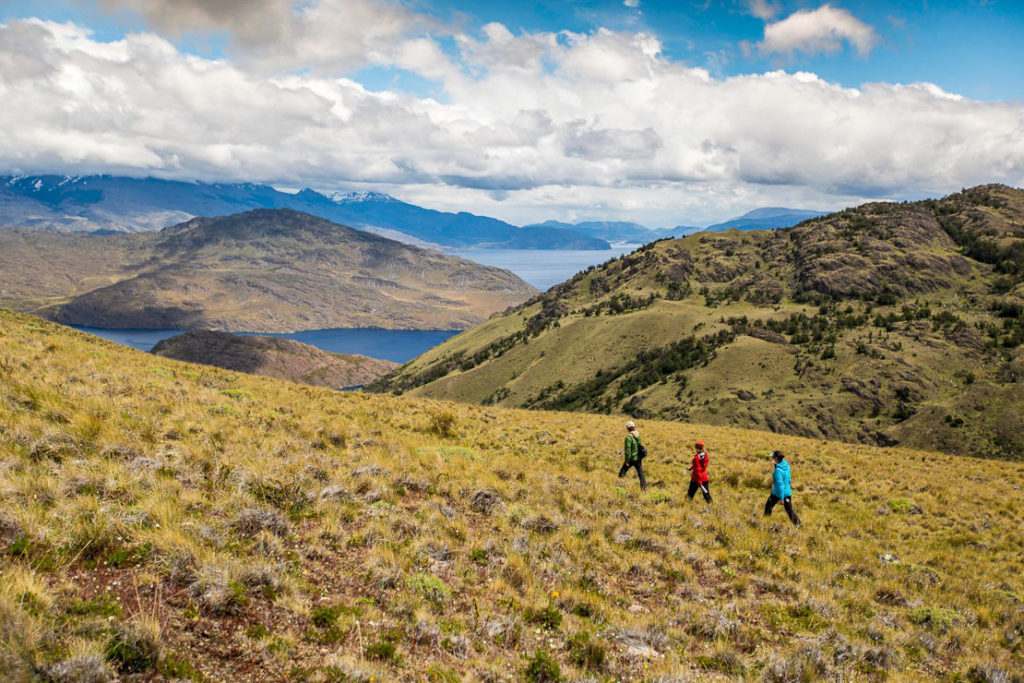 Covering over 3.5 million hectares, the Bernardo O’Higgins Park, created in 1969, is the largest in Chile and one of the largest in the world. The 49 glaciers that originate in the Campo de Hielo Sur and form the park are its main features, and represent the third largest expanse of ice in the world, after Antarctica and Greenland. The iconic Pío XI glacier is the largest in the southern hemisphere and the only one in the hemisphere not to be in retreat. The best way to appreciate the beauty of the park, which has been home for many years to the indigenous Kawésqar people, is by boat. The park is also home to one of the largest populations of Huemuls. A boat trip between Puerto Yungay (Aysén region) and Puerto Natales (Magallanes region), with one stop in Puerto Eden, provides a wonderful view of the park. 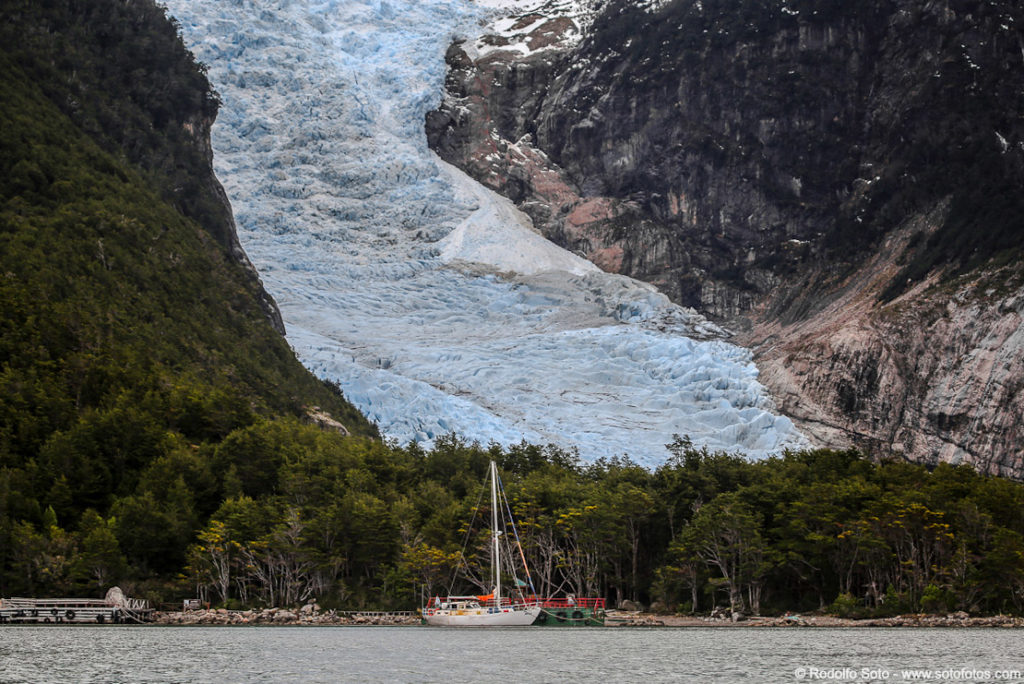 Declared by UNESCO as the Eighth Wonder of the World and a Biosphere Reserve, Torres del Paine is uniquely and hair-raisingly beautiful. The stunning Grey Glacier, the granite peaks that pierce the sky, the turquoise lakes in the image of Lake Pehoé, the forests and vast areas of steppe are the main attractions. The mountain range was formed 12 million years ago and is the ideal location for geology, trekking or rock-climbing enthusiasts. The entire circuit, also known as the “O circuit”, together with the “W trek”, are two of Chile’s unmissable walking trails. The park was created in 1959 and includes 14 types of ecosystems, 270 plant species, and 100 bird species, and it is also home to Pumas, Huemuls, Ñandús and Guanacos. In 2017, prehistoric animal fossils, dating back to 70 million years, were also discovered. 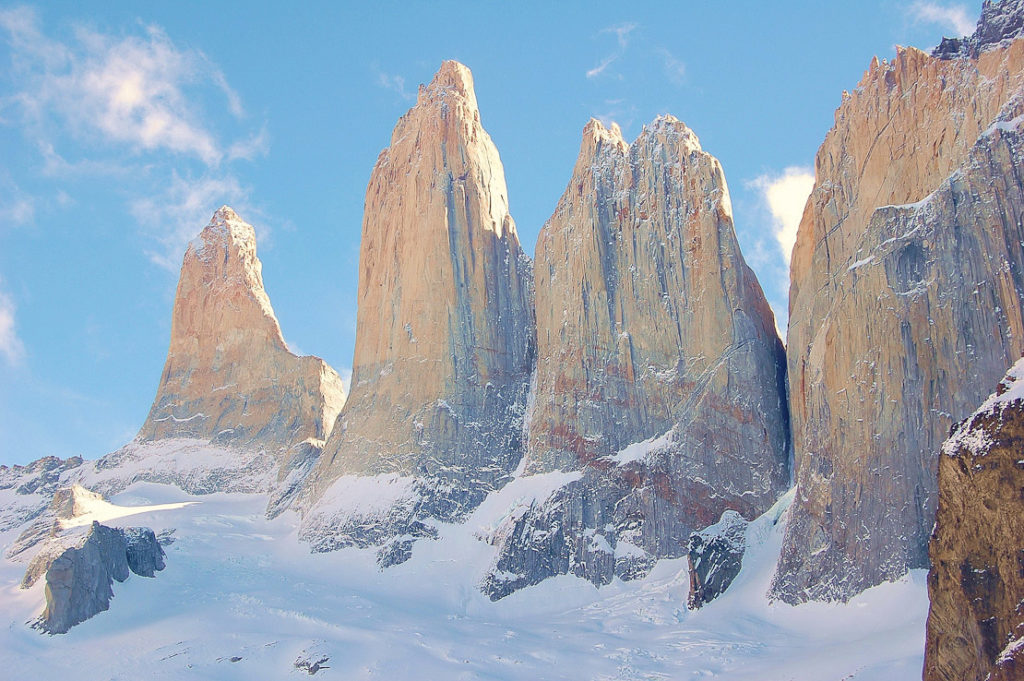 Although it is not yet ready for visitors, the Yendegaia National Park saw the light of day in 2013 thanks to a donation of more than 38 thousand hectares by the Tompkins Foundation, led by Mr and Mrs Tompkins, and the inclusion of more than 111 thousand hectares by the Chilean government. It creates an adjacent corridor between the Alberto de Agostini and Tierra del Fuego National Parks in Chile and Argentina respectively. Vast areas of steppe, unexplored mountains, glaciers, fjords and rivers form this unique area which is home to the ancestral peoples of Selknam and has been declared a Biosphere Reserve. The park protects one of the few remaining forests of sub-Antarctic yew that date back to more than 180 million years. The area is an important habitat for three species facing extinction – the Magellan fox, the river otter and the ruddy-headed goose, and a huge variety of fauna and flora has been identified including 128 species of plants and 49 species of birds. 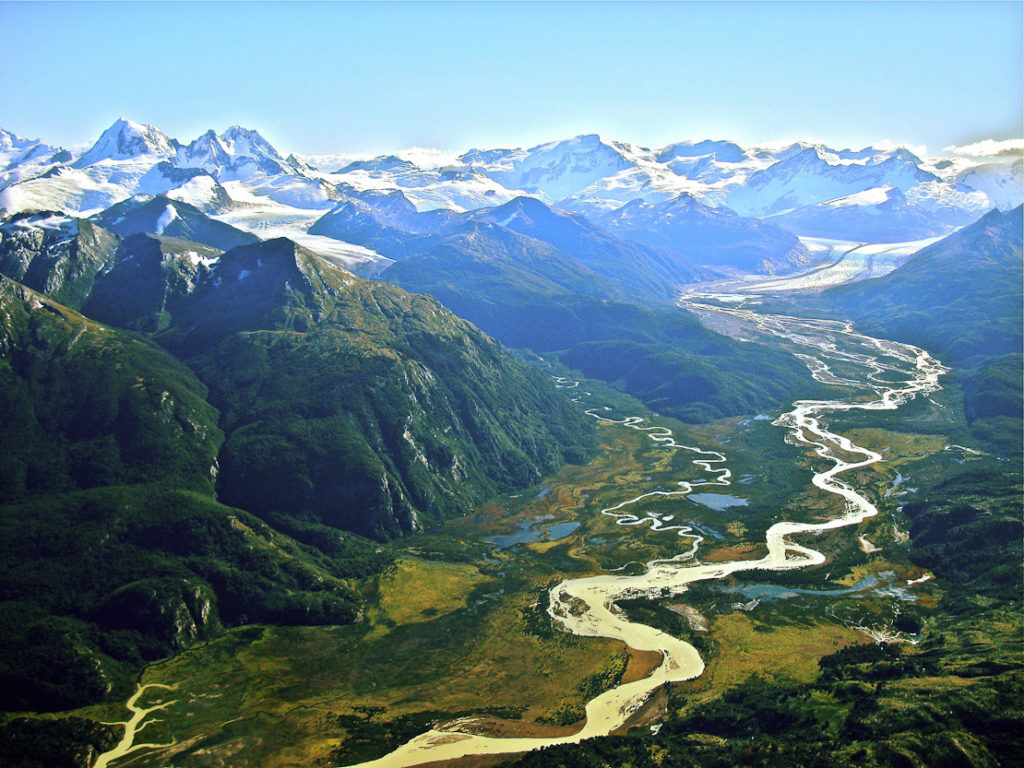 There are many parks to discover in Argentina too. In Patagonia, and independently of the Route of Parks, a foundation which was set up in Chile, you can visit

On the Argentinian side of Patagonia, the Los Glaciares National Park, declared a World Heritage site by Unesco in 1981, is home to a large number of glaciers and also forms part of the Campo de Hielo Sur. Its imposing natural beauty provides visitors with majestic landscapes. The emerald green Argentino Lake, the Perito Merino Glacier, from which immense icebergs detach themselves, the Fitz Roy and the Cerro Torre are unmissable features of the park. 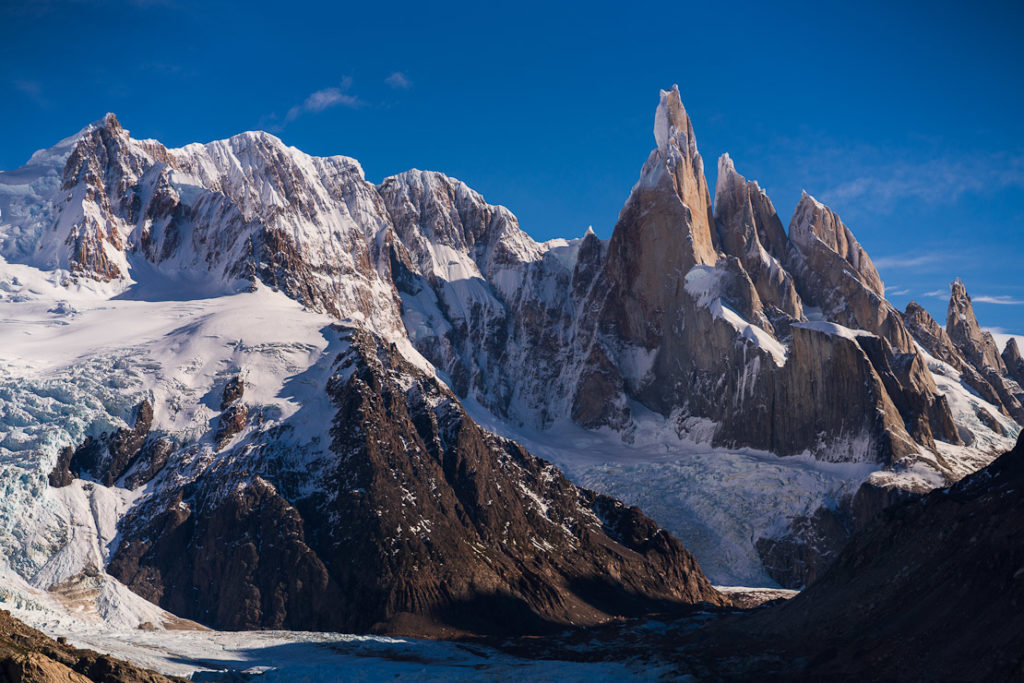 Located in the Land of Fire on the Beagle Channel and near the city of Ushuaia in Argentina, the Tierra del Fuego preserves 70 thousand hectares that offer wonderful opportunities for trekking in unspoilt natural surroundings. Blessed with a unique landscape blending sea, mountains, and forests of lengas, guindos, ñires, and home to whales, seals, sea-lions, penguins, foxes and guanacos, the park provides a unique natural spectacle which plunges visitors into another world, strongly marked by the presence of its first inhabitants, the Yaganes (or Yamanas) Indians. 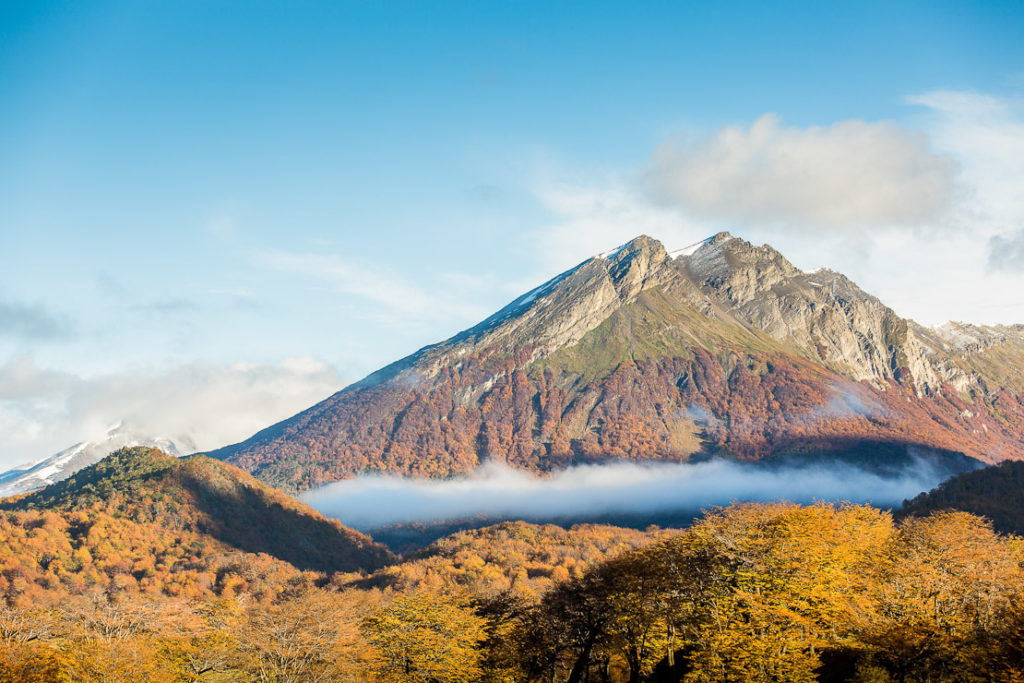